Strictly speaking, this book is not about disability, so I’m not exactly sure if it belongs here or on my other book blog.  I guess you could say it crosses over, so I’m going to go ahead and review it here (and there).

Wonder is sort of a hard book to categorize.  At its core, it’s a story about inclusion, although the story takes place in a (fictional) school that emphasizes that it is “not an inclusion school” (emphasis mine), meaning it is not a school that accommodates kids with special needs.  In all honesty, I’m really not sure why the author chose such a setting for such a story.  It seems like the story would have worked very well – and possibly been a bit more relatable – were the setting a regular public school, instead of a rather elitist private school.

In any case, this story, aimed at the pre-teen set, is about ten-year old August Pullman – “Auggie” to his friends and family.  Auggie was born with a collection of syndromes/conditions that have had the main result of severe facial/cranial deformities.  Auggie’s appearance actually frightens people.  Mostly due to the fact that he’s had to undergo countless surgeries over the course of his young life, he’s always been homeschooled – up until now.  Now, as he enters fifth grade, his parents have decided to enroll him in the prestigious Beecher Prep School (again, not an inclusion school – but Auggie doesn’t have special needs anyway, although he does wear hearing aids).   Not surprisingly, Auggie is terrified (but also excited).

Also not surprisingly, Auggie is not well-received at the school by the other students (or by some of the parents).  The oddity of his appearance literally stops people in their tracks.  “Freak” and “monster” are just a couple of choice names he is called.

Told in the alternating voices of Auggie himself as well as numerous supporting characters, the story unfolds over the course of a school year, and the students of Beecher Prep learn hard lessons in tolerance, diversity, compassion, friendship, loyalty, and character.  The ending is predictable, but leaves the reader reaching for a tissue nonetheless.

There were aspects of the story that bugged me: all the “dating” going on with these very young kids seemed unrealistic; the emphasis on Auggie not having special needs (and, of course, a gratuitous exclamation of “I’m not retarded!” thrown in; I’ve said it before and I’ll say it again: there is a hierarchy of disability, and intellectual disability is at the bottom of the heap); and, as I said, the setting of the story in a school that is “not an inclusion school” even though it’s most certainly a story about inclusion.

Don’t get me wrong, though.  I did like the story.  Very much.  It’s very well-written, and I think the author has done a fabulous job capturing the angst and attitude of this particular age group, and this does make it relatable and likely explains why this book is such a hit with kids right now.

Definitely recommend, with the above-mentioned caveats. 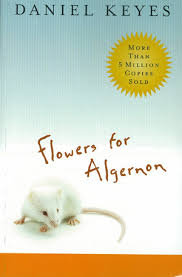 Originally published in 1959, this novel is the imagined story of a mentally retarded man not only gaining intelligence, but genius, by way of an operation.

The story is told in first person, in both diary and “Progress Report” format.  When we are first introduced to Charlie Gordon, he is a 32-year old man with the developmental and emotional status of a child.  He works as a janitor at a bakery and has worked hard to learn how to read and write at the Learning Center for Retarded Adults.  His diary entries and Progress Reports covering the first month or so of the story are extremely childish, and written phonetically.

Then Charlie has an operation, which is never elaborated upon.  The reader assumes it was some sort of brain surgery, although Charlie’s recovery is so swift that it lacks any realism.  But the story isn’t about brain surgery, it’s about the possibility of drastically altering intelligence, and what the repercussions might be.  As Charlie’s intelligence rises following the operation, his emotional maturity lags behind, and that’s the first pitfall.  As he becomes more intelligent, he becomes aware that the people he thought were his friends when he was “dumb” had actually been laughing at him and making him the butt of their jokes for years.  One of his greatest hopes in agreeing to be the subject of this experiment is that a higher IQ will make people like him more, and will gain him friends.  Eventually, however, his intelligence far surpasses that of everyone he knows, including the doctors directing the experiment, and he finds that he has just as few friends as he did before the operation.

As Charlie’s IQ ascends, childhood memories also come flooding back – of an abusive mother who couldn’t bear having a “moron” for a son, a father who couldn’t stand up to his wife, and of a family that ultimately washed its hands of him by dragging him from bed one night and committing him to the Warren State Home and Training School – a repository for the mentally retarded.

With greater intelligence also comes sexual awareness and desire, and much of the story is devoted to Charlie’s sexual awakening.  He falls in love with the woman who was his teacher at the Learning Center for Retarded Adults, and she reciprocates without much hesitation.  I found this relationship disturbing; although Charlie has virtually changed into a new and different person, Alice is fully aware of the experiment of which he is the subject, and moreover, she has been long acquainted with him as a man with an intellectual disability.  To me, it felt like what it might be like if a grown woman fell in love with and became sexually attracted to someone she had once babysat.  I mean, I know it happens, but  . . .

The first subject of this experiment is Algernon, a white lab mouse.  Charlie eventually runs off with Algernon and becomes quite attached to him.  When Algernon begins showing signs of regression, Charlie’s own fate seems clear.

All in all, I thought the story was so-so.  Although it’s clearly outdated, it does raise some valid concerns about the potential price of artificially raising the intelligence of people with developmental disabilities, especially now that we seem to be on the cusp of having drugs available for just such a purpose for people with Down syndrome.  The debate within the Down syndrome parenting community rages on, with one camp eager to give their children every opportunity for an independent life as possible, and the other camp insisting that they accept their children exactly as they are and remaining unwilling to entertain such intervention out of  certainty of a downside.  Me?  I guess I lean heavily towards the latter.

Mom to seven, avid reader; my sixth child, Finn, has Down syndrome, and that's led me to some very interesting reading.

Read with me! Then, let's discuss.