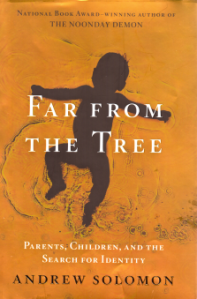 Far From the Tree: Parents, Children and the Search for Identity

I was eager to devour this tome (702 pages, not including Acknowledgments, Notes, Bibliography, and Index) when it started generating buzz in the Down syndrome parenting community a couple of months ago. At its core, it’s a study of the relationships between parents and “alien” children – that is, children born with differences so fundamental as to make them seem alien to their parents. The chapters include such titles as “Autism,” “Schizophrenia,” “Down Syndrome,” “Rape,” and “Transgender” to name a few, bookended by the first and last chapters titled “Son,” and “Father,” recounting the author’s own “alien” identity as a homosexual and how that played out in his role as a son, and then as a father.

How do these families forge bonds? How do they cope with the challenges inherent in the differences that divide them? How do these children find their own identities when those identities can’t necessarily be passed down to them by their parents – and how do such parents nurture or squelch those identities? These are the questions examined at the heart of this book.

I was, of course, especially interested in the chapter on Down syndrome, and I wrote about it here: On Down Syndrome and Falling Far From the Tree. I won’t rehash what I had to say about except to say that it stirred up very mixed feelings for me. Here are a couple of other reviews by parents of children with Down syndrome, if you’re interested: Far From the Tree – I Finally Finished It by Alison Piepmeier; and “Far From the Tree” Review: Families On the Edge by George Estreich. The consensus seems to be that, while Solomon covers important ground on Down syndrome, he missed the boat on quite a bit.

And I wonder if the same can be said about any of his other subjects in the book. Overall, the book is sad and bleak. I read the chapter on Autism, for instance, with great interest, as I have a number of friends who have children who have been diagnosed with autism. To be perfectly frank, Solomon’s portrayal of autism is pretty horrifying, despite the fact that he wants to get the message across that these parents experience a love for their children that is at least, if not more, profound than parents of neurotypical children. I was left wondering, “Is this really how life looks behind closed doors for these people I know who have kids with autism?” Even more so, I wondered – and am still wondering – what those people I know would have to say about Solomon’s treatment of autism – would they dispute the picture he paints as we parents of kids with Ds have disputed his picture of Down syndrome?

In Cristina Nehring’s article, Loving a Child On the Fringe, in which she takes on Solomon’s book, and specifically his take on Down syndrome as the parent of a child with Ds herself, she lashes out at him for, in the end, seeking an “A-1” baby for himself, and for wrongly seeing himself as an “adversity survivor” when his child is born and needs a CAT-scan to investigate some apparent physical anomalies. I read Nehring’s article before I read Solomon’s book. Having now read the book, I think Nehring exaggerated; although Solomon and his husband do go through the usual process of sifting through donor profiles once they’ve decided to have a child via egg donor and surrogate; in the end, they abandon that and conceive a child with a close friend, and they forego amniocentesis that would detect birth defects. When their newborn requires a CAT scan, Solomon describes the terror any new parent would feel at being told that their brand new baby may have something seriously wrong with it. In that brief span of time between being told that, watching his newborn son undergo the scan, and finally being told that all was well, Solomon discovered in himself what most of we parents who have children with unexpected conditions discover: that our love for those children prevails over terror.

All that said, however, I’m still at sort of a loss about this book. I wonder what the real point of it is: if the point is to engender tolerance and compassion for diversity, I think Solomon paints too bleak a picture of most of his subjects to accomplish that. And who, exactly, is this book’s intended audience? If it’s for the general public, I think in large part it will only serve to reinforce the societal feeling that difference is scary and unpleasant. If it’s meant for the families of children with “horizontal identities,” I think, unfortunately, Solomon falls short of the mark despite his extensive research.

Mom to seven, avid reader; my sixth child, Finn, has Down syndrome, and that's led me to some very interesting reading.

Read with me! Then, let's discuss.